Congratulations to Charlie Inglis – the event co-ordinator of the Trust’s annual Bike Ride.

His committee are already planning the next Bike Ride on Saturday, September 14.

But he has just landed Norfolk’s top conservation award, the Ian MacNicol Memorial Trophy, for creating a profitable wildlife haven on the family farm near Holt.

Awarded by Norfolk Farming and Wildlife Advisory Group, it recognises the best conservation efforts by farmers and landowners in the county. 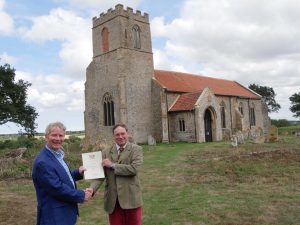 Of course, Charlie is no stranger to success. In 2017, he was presented with the Prince of Wales’s certificate for raising most funds on the Bike Ride – when he raised £3,730.

When his father-in-law Robin Carver came to Hole Farm, Hempstead, in 1982 – it had hardly a tree, hedge or indeed much wildlife. Since then, nine miles of hedges have been planted as well as blocks of woodland and 14 ponds dug.

A survey by the Game & Wildlife Conservation Trust last year recorded 759 beetles from 25 species in one floral-rich margin on the 270-hectare farm. It now has some three dozen woodland blocks, which add to the diversity on the farm.

For details of the latest Bide Ride, see our website.