Counting down to Bike Ride 2020 – the signs are going up.

Counting down to the Big Bike Ride on Saturday, September 12 . . . and dozens of signs have been going up across north and south Norfolk. 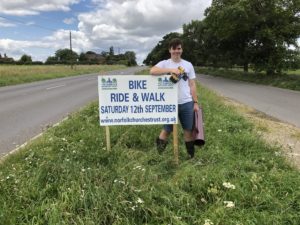 Bike Ride organiser Charles Inglis, helped by his son Lorne, have been hard at work putting up road and field signs for the Norfolk Churches Trust’s big fund-raising event.

“We’ve put up at least 25 signs across a good part of north Norfolk. And it has been really encouraging as we’ve seen so many cyclists out on the road who’ve then asked about the Bike Ride event,” said Mr Inglis.

His son, who took a prize-winning photograph on last year’s Bike Ride, has been a great help, he added.

In south Norfolk, another trustee, Ian Lonsdale, had also been putting up signs – all promoting the big event.