St Mary’s church, North Tuddenham, between Norwich and Dereham, has just been awarded an exceptional grant of £280,000 to prevent collapse of its medieval tower. 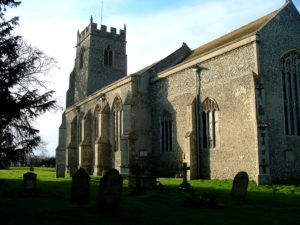 Norfolk Churches Trust, which kickstarted the repair fund with one of its largest single grants of £15,000 in March 2019, welcomed Historic England’s support.

“St Mary’s tower has been one of our biggest worries,” said Michael Sayer, chairman of the Trust’s Grants’ Committee. “It is one of the reasons why we gave one of the largest grants,” he added.

“It is a landmark church tower which dominates the landscape and can be seen from the A47,” said Mr Sayer.

For St Mary’s, it is also a case of third time lucky because two previous applications for Heritage Lottery Funding had been rejected.

Although places of worship don’t normally qualify for Historic England’s repair grants, an exception was made for North Tuddenham. It was added to the national Heritage at Risk Register in 2017 after cracks were seen in the tower.

The 14th century tower, the earlier part of the church, also houses a single bell dating from circa 1380 – the era of the Peasants’ Revolt.

The Trust has earlier warned that the tower was “in perilous condition” because of the extensive cracks and repairs were then estimated to cost around £296,000.

One of the treasures of the church is the medieval glass – bought by the Rev Robert Barry (rector from 1851 to 1904) from a builders’ merchant in Dereham for 10/6d!

The north porch has some exceptional stained-glass depicting the saints Catherine and Cecilia on one side and a bishop, angels, dragons and eagles on the other.

“We have awarded this exceptional grant to save the historic tower at St Mary’s Church from potential collapse. The church is an important historic building, treasured by its local community, and it was imperative to act urgently to ensure that the church is saved and protected for the future,” said Tony Calladine, Historic England’s eastern regional director.

Help support Norfolk’s Churches by taking part in the annual Bike Ride on Saturday, September 12. Details on the website.