Trust’s swift response with grants of £65,000 to 16 churches across the county

Urgent repair work to a Breckland church prompted a swift response by the Norfolk Churches Trust.

In its latest awards  of £65,235 to 16 churches across the county, the Trust was able to step in with a grant worth a total of £10,000 to ensure that on-going repair work could be completed at St Peter’s, Merton, near Watton.

A delighted Jayne Wesley-Smith said that the Trust’s response has been fantastic. “We’re so grateful to other funders who also helped,” she added. The church received a grant of around £100,000 from the National Lottery Heritage Fund in 2019 to fit a replacement zinc roof. This work was being carried out when roof timbers were found to be rotting and this extra work added more than £17,000 to the total cost. Now, it has virtually been completed.

The Norfolk Churches Trust has awarded a grant totalling £10,000 to enable the final repair work at Merton to be completed.  This is made up of £8,700 at the March meeting, topped up with £1,300 from an earlier grant for window repairs that was not used.

Michael Sayer, chairman of the NCT’s grants’ committee, was able to propose total grants of £65,325 to 16 churches. When the March council meeting was cancelled because of the Covid-19 epidemic, his committee’s proposals were reviewed by members of the advisory council and then finally agreed.

Three awards, each of £8,000, have been made to St Andrew, Wellingham, near Fakenham; All Saints at South Lynn and All Saints, Wretton, near Downham Market, all receive £8,000.

Other major awards include the following – 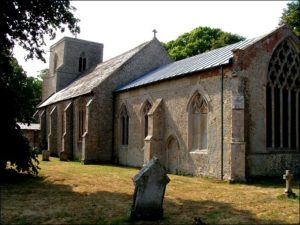 £7,000 – St Mary, Tittleshall, near Fakenham (pictured right), for replacement flooring in the south side of the nave. 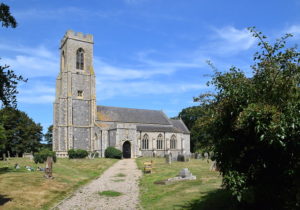 £3,000 – St Edmund, Acle, towards re=thatching the north side of the nave and the ridge.

£2,000 – St Mary, Haddiscoe, for repairs to the south side of the nave roof and to St Andrew, Little Massingham to restore west window damaged during Storm Ciara on Sunday, February 9.

£1,875 – All Saints, Helhoughton, near Fakenham, for survey and report into widespread cracking and damp in nave and chancel walls.

£1,500 – All Saints, Hethel, near Wymondham, to remove plaster on south wall of chancel and to remove hard external render.

£1,000 – St Mary, East Rudham, to repair the south-west roof and to St Andrew, Great Ryburgh, near Fakenham, to repair south chancel window by William Wailes, dating from 1870 and also All Saints, Woodton, to repair tower roof and tracery to west window.

While the Trust took the decision to cancel next month’s major fund-raising event, the Stately Car Boot Sale at Sennowe, near Guist, and hold it in May 2021, it is hoped that the annual Bike Ride – which takes place in September – may go ahead.

As a member-funded conservation heritage charity, the Trust is dependent on support and fund-raising to help hundreds of churches across the county.

Details of membership can be found on the website.