Thatcher on target to finish re-thatching at Acle this month

A pre-decimal chocolate bar wrapper was found during the latest re-thatching of a Broadland church.

Work started last month to re-thatch the north slope roof of St Edmund’s Church, Acle, which will cost about £40,000.

The Norfolk Churches Trust gave a £3,000 grant in March towards the thatching target. The Round Tower Churches Society also awarded £3,000 at its grants’ meeting in May.

The Rev Martin Greenland, rector of the Acle and Bure to Yare Benefice, said that the roof on the south side, which was re-thatched about 25 years ago, has also been combed. As a result, this roof is looking very smart, he added. 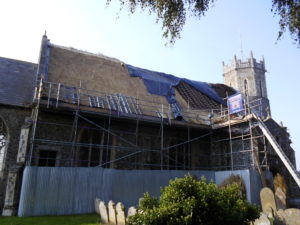 The sedge ridge will also be replaced as part of the latest project by Richard Haughton, of Broadland Thatchers, of North Walsham, who started on his own account in 1995. It is likely that the thatching will be finished later this month.

He will need a total of 1,900 bundles for the task and he’ll also be using Norfolk sedge for the ridge.

While he was working on the north side, he found the Aero bar tuppeny wrapper, which had been left from the thatching carried out before the February 1971 decimalisation. It was marked with the price, 2d (about 1p).

Rev Greenland said that the thatch appeal had met its target with many local donations as well as £2,000 received from the Geoffrey Watling Trust earlier this month. The Garfield Weston charity had also given £4,000.

He also thanked the Society for its financial support, which was much appreciated.