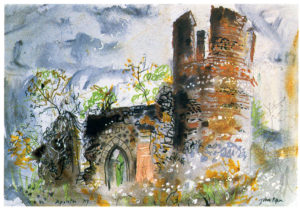 An exclusive money-saving offer on an inspiring book about East Anglian churches is available from a Norwich publisher.

In the author’s artistic journey through the fens, Norfolk and Suffolk and into Essex, he has considered how the remarkable heritage of medieval churches, and sometimes their ruins, have influenced the artists.

As a former conservation officer with Breckland Council, Mr Tolhurst has a deep understanding of his subject and especially the importance of John Sell Cotman, who influenced so many artists over the last couple of centuries.

He has also included some tremendous photographic images, both in colour and especially in black and white, from Richard Tilbrook of Forncett Church and Mick Cant’s view of St Margaret’s, Hales. Another, of the deserted village of Godwick by Simon Denison in 1997 is equally dramatic.

But this is much more than just a collection of the best East Anglia pictures, Mr Tolhurst has written about the history of the churches and how they have become such an important part of the country’s national heritage. A chapter on Norfolk’s ruined churches, “Pleasing Decay” begins with John Piper’s 1983 view of Bawsey Church and another of Appleton painted a year earlier. He has clearly researched the background to the history, which really adds to the flavour of this memorable book.

Other chapters look at round tower churches, romantic ruins in Norfolk and also the landmark churches in the fens.

It includes a number of other striking views of long-lost churches including Egmere and Joseph Glover’s 1822 oil of Whitlingham Church – again with plenty of background explaining why these once important places of worship were lost.

Having spent the past quarter of a century writing and publishing books about the art, literature and history of East Anglia, his latest production is really rather special. Mr Tolhurst wrote three successful volumes of Norfolk Parish Treasures between 2014 and 2016 as well as other books.

Copies are also available at all good Norfolk bookshops.