A Norfolk church is the stamp of choice for hundreds of millions of Christmas cards. 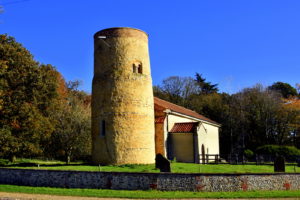 As the annual rush to post an estimated 900 million cards starts in earnest, the round tower church of St Andrew’s, East Lexham, was chosen for the Royal Mail’s second class Christmas stamp.

The Nativity scene from the east window of St Andrew’s Church is one of the Christmas stamps, which were issued on November 3.

By December 18 – the last official day for second class post to arrive by Christmas – millions of stamps will have been stuck on the nation’s cards.

For churchwarden and a Norfolk Churches Trust’s vice-president Neil Foster, of the Lexham estate, the official 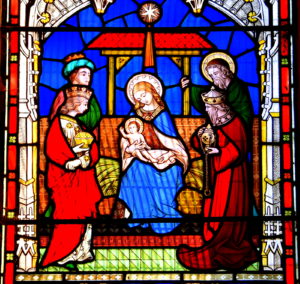 launch of the stamp issue was a relief.

“We were told more than a year ago that a stained glass window was to feature on the 2020 Christmas stamp issue. We were sworn to secrecy,” he said.

“I’ve really no idea why our church was chosen for the Christmas stamp. It is a lovely window and the church does get many visitors.” he added.

Since 2013 when his brother Richard installed a painting of the Nativity, it has attracted even more visitors.

An image from the main east window, thought to have been made by Clayton & Bell in about 1859, has been used for two Royal Mail stamps – the second class and a “Large Letter” to highlight the skill of stained glass makers.

It may encourage visitors to see the window at East Lexham, which is between Fakenham and Swaffham. 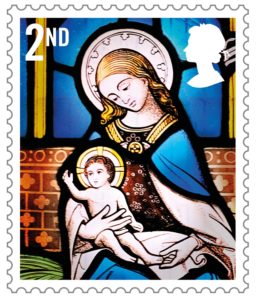 The stamp issue could be regarded as the “icing on the proverbial cake” because this autumn a major tower restoration was completed, with help from the Heritage Lottery Fund, and led by architect Ruth Blackman, of nearby Beeston-next Mileham.

It involved substantial repairs to the roof and parapets of the tower, including removal of mortar used in 1968. Incidentally, the names of the workers on the Lexham estate, which paid for the work, from that time have been set in the tower’s stone coping – CR Tilney, J Bodimeade, W H Potter, R King and W H Dunnell.

The 2020 Christmas stamp took an aspect of the main east window. The Rev Canon Heather Butcher, the rector, said: “We’re really excited about it. It’s the only window in a very tiny church.”

“The east window is full of colour and conveys so much of the Christian message with the triumphant ‘He is Risen’ at the apex,” she added.

Philip Parker, from Royal Mail, added: “Our beautiful Christmas stamps feature the Nativity as told through the artistry of different styles of stained-glass windows.”

The main source on Norfolk Victorian stained glass by Birkin Haward fails to shed light on the history. However, the window was given in memory of Frederick Walpole Keppel, who died in 1858, and Col Edward Keppel, died 1859. The Walpole Keppels owned Lexham Hall from 1807 to 1911.

The manor was bought in 1806 by Sir Edward Walpole as a dowry for his daughter Laura on her marriage to Frederick Keppel. There are family memorials on the north chancel wall.