A major restoration of a medieval church tower in north Norfolk has been given a welcome boost by the National Lottery Heritage Fund.

St Nicholas Church, Wells, has been awarded £39,200 in development funding for an ambitious community programme and to safeguard the 13th century medieval tower, which stands proud over the town. 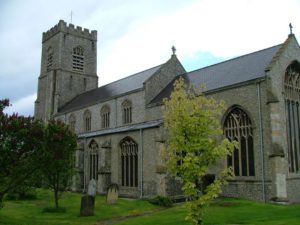 St Nicholas, which is on Heritage England’s At Risk Register, was largely rebuilt in 1460 and then mostly destroyed by fire in 1879. The main body of the church was re-built in 1883 but today, substantial repair of the tower is needed, said fabric officer Peter Terrington.

Work was also starting on Monday, March 23 on more pressing repairs including fixing the roof on the south aisle. Here the help of the Norfolk Churches Trust, which made a grant of £5,000, has been really appreciated, said Jean Terrington, who is treasurer of the parochial church council.

Mr Terrington said that the tower has become an increasingly concern partly because the tie-rods used in the late Victorian repair work needed replacing. As they’ve started rusting and deteriorating, it has allowed moisture to damage and crack the stonework. In addition, the tower’s parapets also needed attention too, he added.

After almost 140 years since the restoration, further work was needed to secure buttresses and also replace rainwater goods, said Mr Terrington. Many of the windows also needed attention because where metal fixings needed replacement.

However, the church was looking forward with enthusiasm to developing a series of community programmes as a heritage learning hub and also as a “green lung” for the town. This second full phase could cost in the region of £287,000 if it won support.

A conservation wellbeing area would be created in the churchyard. A new interpretative scheme would link Wells Maltings and the “Wonderful Wells” Town Trail, which uses the church as its hub and also includes Wells Harbour.

“We’re also very excited about the community projects that are being planned and developing our churchyard. St. Nicholas Church has always been such an important building in Wells-next-the-Sea and it’s great to know that we are a step closer to preserving it for future generations of local people and visitors to our town,” she added.

The church will now prepare its detailed project, “Well, Well, Wells” for submission for full backing from the Lottery Heritage Fund.