Two National Lottery Heritage Fund awards worth a total of almost £175,000 will help bells at a south Norfolk church sound again and enable a Breckland church replace its lead roof.

A round tower church at Aslacton in South Norfolk has a set of five bells dating from the early 1600s, which had to be silenced. 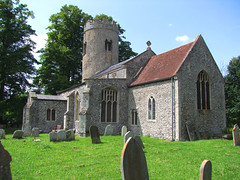 St Michael’s Church, Aslacton, near Long Stratton, has received £73,200 to carry out further repairs to the tower. In 2012, the bells were silenced when a large crack appeared in the tower, which may date from Saxon times.

The ringing peal of bells were all cast by William Brend, of Norwich, and include ones dated 1604, two in 1607 and one in 1614. It is thought that there are only two full sets in Norfolk cast by Brend, which have survived. The other is relatively nearby at Thurton.

Although Aslacton was recorded in Domesday Book’s Great Survey of 1086, there is no specific reference to the church, which has a 53ft high round tower. However, it includes many typical Saxon features including belfry openings with flint jambs and double triangular headed openings, and a blocked flint framed west door.

When further structural damage was identified, the parochial church council led efforts to secure further funding to complete repairs and to make the church and tower weather-proof.

And in Breckland, a lottery grant of £100,000 will benefit St Peter’s Church, Merton, near Watton. It will repair its nave roof with zinc – having twice been the victim of lead thieves in the past eight years. 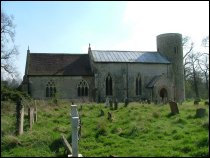 When thieves struck in August 2015 and stole an estimated £2,000 of lead, it was then estimated that the total repair bill would be around £25,000.

The Norfolk Churches Trust has offered financial help to this church in the past.

The latest lottery grant will enable the church to be used as a local meeting place and for seminars, workshops and concerts to be held. A number of initiatives to promote the church’s heritage and history will also be undertaken.

St Peter’s stands on raised ground overlooking the lake and Merton Hall. The church has been closely associated with the de Grey family and their ancestors, who have been lord of the manor from the Norman Conquest.