Eight churches across the county will share £25,500 in the latest grants from the Norfolk Churches Trust.

It brings the total grants awarded by the trust this year to more than £102,000, which will benefit 36 churches and places of worship.

The record fund-raising from the annual September Bike Ride – now approaching £170,000 – has made it possible make the latest grants.

While the Bike Ride proceeds are shared with the individual fund-raiser’s church, it has generated welcome income for the Trust, which had to postpone its Stately Car Boot Sale and numerous other events this year, because of Covid-19.

Since 1983, the Trust’s Bike Ride has raised more than £3m to fund repair and conservation of churches across the county.

Michael Sayer, chairman of the Grants’ Committee, told the virtual meeting that two grants, each of £7,000, should be made to All Saints, Wilby, in south Norfolk, and to St Peter’s, Spixworth, north of Norwich.

St Peter’s, which was currently closed because of collapsing ceilings, needed at least £30,000 to conserve and protect the painted panels.

The trust awarded £7,000 for essential investigative and preliminary work as Wilby’s church faced a potential cost of around £200,000 for major repairs to the chancel roof, buttresses, porch and parapets.

A Mid-Norfolk church, St Peter’s, Reymerston, has been given a £3,000 grant to repair a window arch and south aisle roof beam, which has been damaged by damp. 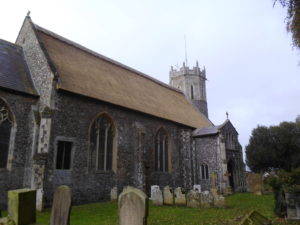 Grants of £2,000 were made to the following three churches

St Helen, Gateley, near Fakenham for urgent repairs to the tower stairs. This follows a £2,000 grant in November 2018 for tower repairs.

St Peter, Ringland, near Norwich, for inspections of cracks in the tower and the drainage system.

St Mary, Colkirk, near Fakenham, urgently needs to repair the north aisle floor and south wall caused by damp. The total cost is likely to be about £16,000.

Repairs to the roof of All Saints, Beeston Regis, near Sheringham, which was identified in a five-year church condition report, will receive a £1,500 grant.

And £1,000 has been awarded towards the repair of three nave windows at St Mary’s, Elsing, near Dereham.

In April, the Trust’s grants included £3,000 toward re-thatching a roof at St Edmund’s, Acle (pictured,  courtesy of The Revd Martin Greenland, Rector, Acle & Bure to Yare Benefice) which has now been completed.