Landmark church and spire in mid-Norfolk gets major lottery funding

A major restoration of a Mid-Norfolk landmark church spire will be starting later this spring.

The church of St Mary the Virgin at Beeston-next-Mileham has been awarded £230,300 from the National Lottery Heritage Fund for major repairs. 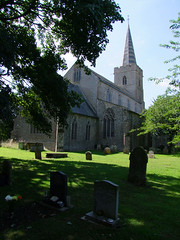 The grade 1-listed church with its twin-coloured octagonal Victorian spire was a welcome landmark for American aircrew returning to Beeston during the second world war.

Churchwarden Andrew Lawrence was thrilled by the award, which will help to safeguard the future of this special church. He was also grateful to the church’s architect, Ruth Blackman, of Birdsall, Swash & Blackman, who lives just across the fields from the medieval church for her help with the successful funding bid.

The project, which will cost a total of £295,883, also involves substantial work to the roof and the walls. The Norfolk Churches Trust gave £10,000 last October for the repairs.

The twin-banded spire, made with Welsh and Westmorland slates, remains at risk of collapse.

Mrs Blackman said that a detailed investigation of the roof revealed severe problems where water had rotted many timbers, which would need replacing. This would be a challenge for the skilled carpenters from Norwich builders G F Atthowe because of the unusual mortise & tenon designs of the roof timbers.

Mr Lawrence said that the parochial church council was keen to encourage students from the nearby Litcham High School to take a practical interest in the restoration project. The contractors planned to hold several workshops for students, who would be able to see some of the skills and techniques involved.

During the bid process, a team from the Heritage Lottery Fund met High School students, who explained how they had been involved with planning the repair project with the architect.

The church was the 2010 national winner of the John Betjeman Award for excellence in repair of its medieval roof.

Almost two years ago, a special service was held at the church marking the restoration of the country’s first American Memorial just outside the village. Established in 1945, it commemorates the aircrew of the 392nd Bomb Group killed in action. When it left Beeston, officially known as RAF Wendling in June 1945, it had lost 832 men in 21 months and 184 B24 Liberators in 21 months.