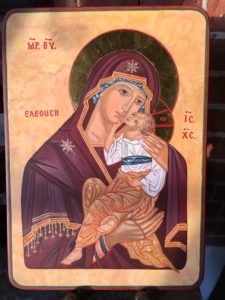 A celebration of living art at Norfolk’s landmark “church on the hill” will be taking place from late June.

St Peter’s, Corpusty, stands on the skyline on the Norwich to Holt Road.

Artist Judith James, who lives in the village, is exhibiting about 20 of her icons between Friday, June 28 and Friday, July 5.

She intends to paint an icon while the church is open to visitors. Special plinths have been designed for her icons, which feature many traditional images.

“I staged an exhibition in Italy last year inside an abbey and was able to use the space to make a great impact. St Peter’s is also a large, bright space – just the right setting for a celebration of striking images,” she said.

Although born in Norwich, she frequently visited her grandparents, who lived at Manor Farm in sight of the church.

Later as a mature student she studied fine art at Newcastle University and has specialised in painting icons for the past eight years. Her first attempts at iconography were painted on terracotta tiles but having studied with English, American, Italian and Russian teachers, she now paints in the traditional methods using wood and linen. 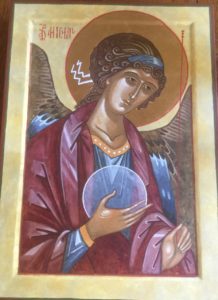 Icons tend to be flat and stylised partly because the perspective is different and the subject often looks at the viewer. When blessed by a priest an icon can be used in a church or in a private house as an aid to prayer.

St Peter’s has a special place in the Norfolk Churches Trust’s history. In 1974 Lady Harrod’s interest in the church was a catalyst, which led to the founding of the trust. Taken on by the Friends of Friendless Churches in 1982, St Peter’s passed into the trust’s care in 2009.

Saturday, June 29 – The patronal service will be conducted by the Rev David Longe, vicar of Saxthorpe, at 2.30pm. Picnic from 1pm.