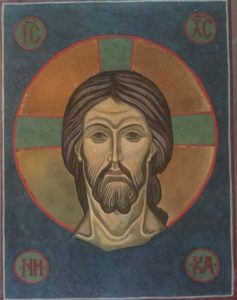 A stream of visitors attended a special exhibition at Corpusty’s “landmark church on the hill.”

The eight-day display of more than 20 icons by local artist Judith James attracted many visitors to St Peter’s Church, which stands on the skyline on the Holt road.

“There was a steady stream of visitors, sometimes six to eight people in the church at a time. There were over 70 positive comments in the special visitors’ book for the exhibition,” she added.

And to her delight, Judith, who lives in the village, also manage to sell some of her icons. “All this added to the joy of participating in an event in the ‘landmark’ Corpusty Church. Altogether a good result and hopefully the first of other such ventures,” she said.

It also generated many contributions to the trust as well.

St Peter’s has a special place in the Norfolk Churches Trust’s history. In 1974 Lady Harrod’s interest in the church was a catalyst, which led to the founding of the trust.

Taken on by the Friends of Friendless Churches in 1982, St Peter’s passed into the trust’s care in 2009.

The recent annual patronal service, which was taken by the Rev David Longe, vicar of Saxthorpe, on Saturday, June 29, was attended by more than 30 people.