An increase in membership will be reported at September’s annual meeting of the Norfolk Churches Trust.

Income from membership last year of £41,185 was £4,030, which represented more than a tenth of the Trust’s total annual income. Individual membership costs £30 or joint £45.

Two new approaches to boost membership and one especially to encourage supporters under 30, are being considered. Mr Sheppard said that the trustees would like to introduce a reduced annual rate subscription for the under 30s. A further priority will make it as easy as possible to join the trust with online subscription and payment through the new revised website, he adds.

In the annual report to the Trust’s 44th annual meeting, which will be presented online to members via Zoom on Wednesday, September 9, Mr Sheppard notes that the year began “full of enthusiasm and excitement with a healthy balance sheet, plenty of church restoration projects and a full diary of events.” Then Covid-19.

However, the Trust held many, highly-successful fund-raising events including the Norfolk Bike Ride, the Holkham Opera performances and the House by the Church.

It enabled the Trust to give £171,825 to 41 churches, chapels and places of worship towards repair/ conservation and restoration work. In addition, grants to 37 churches of more than £135,000 were paid.

The support of many trusts and individuals is also recognised in the latest annual report. Several legacies also contributed £35,000 to the Trust – up from £5,000 last year.

Mr Sheppard also welcomed the backing of the Bishop of Norwich, the Rt Rev Graham Usher, who has become a vice-patron. 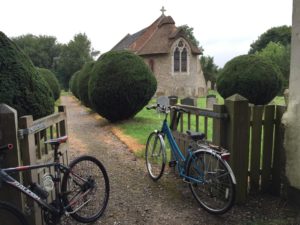 In terms of fund-raising, he urged as many people as possible to take part in the Norfolk Bike Ride on Saturday, September 12.

“We are putting together an appeal for donations and legacies to try and make up for our lost revenue from events this year,” said Mr Sheppard.

The 44th annual meeting will be held online on Wednesday, September 9 at 5.30pm.