A forlorn, forgotten and derelict church in the heart of Norfolk was saved – thanks to a retired agricultural engineer Bob Davey, who has died aged 91.

He restored St Mary the Virgin, Houghton-on-the-Hill, near Swaffham – and quite by chance, discovered some of the most important late Saxon wall paintings in western Europe.  On another wall, a painting thought to be about 1,000 years old, may be Britain’s earliest example of The Wheel of Fortune.  The extraordinary story of the rescue of this remote church, which may date back to the early years of the 7th century, owes more than a little to chance too.

His late wife, Gloria, had been on a walk with fellow members of her Women’s Institute in June 1992 when the group stopped for a rest. In dense undergrowth, she found some gravestones and started to look around – and managed to get into the ruined church. There she found symbols of Satanic worship – a pagan altar, the number 666 scratched on the wall and a goat-headed image on another.

She told her husband, who was a churchwarden at North Pickenham. Horrified that the church was being used by devil-worshippers, he took action and decided to start clearing the churchyard – and later the body of the church too. 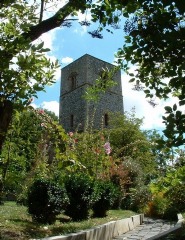 He thought that tidying up the churchyard could stop the Satanists. It rolled on from there, as he cleared the church, and then setting about restoring the ruins.  It was a formidable challenge. The roof had fallen in, the tower had a serious crack and ivy covered most of the ruins.

Over the years, he repaired walls and propped up the tower with second-hand timber. It had been badly damaged during the First World War by a bomb dropped by a Zeppelin.

He managed too, later with help from the local Territorial Army, to send the Satanists packing although he received death threats and even an attempt was made to run him down.

In the next 25 years, he worked without even taking holidays to restore the church to its former glory. The roof, floor, windows and missing stones have been replaced.  Even the original font was returned – it had been used for planting bulbs in the rector’s garden.

But a chance discovery was to make headlines around the world and attract international film crews. While patching one of the walls in 1996, a lump of plaster fell. “The first thing I saw was the head of an angel,” he said.  As subsequent investigations were to reveal, the Victorian plaster covered a series of important wall decorations, as Simon Knott describes on his website.

There were painted texts dating from the reign of Queen Elizabeth I, then numerous wall paintings from the 12th, 13th and 14th centuries. But to the amazement of the country’s leading heritage organisations, they found some of the best sequences of late Saxon wall-paintings known in western Europe.  Cambridge conservator Tobit Curtis worked on the wall paintings in 2006 – thought to be at least 1,000 years old. The north wall depicts the creation of Eve, and Noah’s Ark, part of a number of Old Testament stories. The Wheel of Fortune, on the south wall, may be Britain’s earlier example of this once-popular illustration. 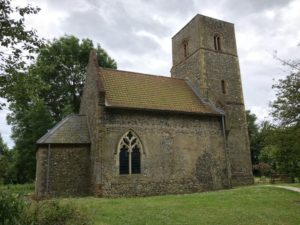 It is likely that there has been a church on the hilltop site since the 7th Century.  There could be a link to St Felix, who came from Burgundy in 630, bringing Christianity to the then “Kingdom of the East Angles”. The church on the Sandringham estate at Babingley is also dedicated to St Felix.

In 1998, Houghton-on-the-Hill church – jointly with the Windsor Castle restoration – won a building conservation award from the Royal Institution of Chartered Surveyors. In that year, Mr Davey was made MBE.  The Prince of Wales and the late Princess Margaret have also visited the remote church.

Born on April 25, 1929 in west Sussex, Robert Davey spent most of his working life as an agricultural engineer in his native county. Later he worked for Southern Water before moving to North Pickenham in 1987. He started an antiques business in Swaffham but later gave it up to devote his energies to the church restoration.

The church, which is also a museum, is now used or occasional services. The last baptism had been in 1933 and wedding in 1925. But decades later, a Communion Service was held.

‘Lyn Stilgoe, secretary to the Round Tower Churches Society, also took visitors to Houghton on a Norfolk church tour in 2014. “I was privileged to be there for the first Communion Service held in the Church for decades on September 13, 1998.”

EDP article on 20th March can be read here

For more information about the church – https://www.houghtonstmarys.org.uk/