With more funds still arriving, the Norfolk Churches Trust has already smashed the all-time record set of £139,564 set in 2008.

Organiser Charlie Inglis, of Hempstead, near Holt, has been amazed by the support for the trust, which aims to help churches and chapels of all denominations.

It also brings the overall total since the Bike Ride in 1983 to more than £3m – all to safeguard and maintain the county’s rich heritage of places of worship.

Hundreds of people took walked, cycled or part in September’s Bike Ride, which was also supported by the Bishop of Norwich, the Rt Rev Graham Usher.

One of the oldest is thought to be a pensioner, who will celebrate his 80th birthday next month, and the youngest, a six-year-old girl, Jessie. She raised a staggering £912 for South Burlingham Church by cycling 16 miles. 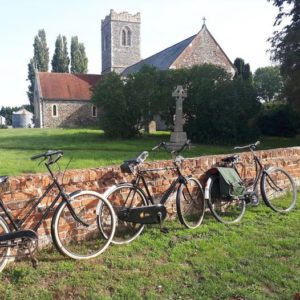 Mr Inglis, who is a trustee of the charity, cycled to 23 churches with his son Lorne and his three friends. “We were incredibly fortunate with the weather but the overall response has been terrific,” he added

As previously reported in the EDP, which again sponsored the annual event, a single anonymous donation of £25,000 to be shared with Burnham Norton Church was a further boost. Last year, the Bike Ride raised more than £95,000, he said.  The EDP has published a follow up story today, 13th November, and you can read it here.

Annual membership costs £30pa or £45pa for joint – see the website for details.