Congratulations to two worthy winners of Prince of Wales Certificates for taking part in the 2019 Bike Ride. 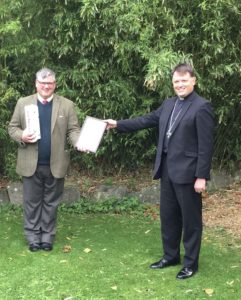 West Norfolk supporter William O’Brien was presented with his certificate by the Bishop of Norwich, the Rt Rev Graham Usher, who is a vice patron of the Norfolk Churches Trust.

Mr O’Brien was recognised for his efforts over many years for raising funds for his church, St Martin, Fincham, near Downham Market, and for the trust.

A further award was also made for a member of the “most improved” church, which raised the most funds compared with the previous year. Mary Truman was given £1,000 to boost funds at St Margaret, Herringfleet, as well as the specially signed certificate from the Prince of Wales, who is the trust’s patron.

Mary has been a long term supporter of the Bike Ride and was a winner of the Prince of Wales certificate in 2016. 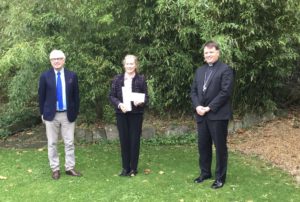 The 2020 Bike Ride has been a great success, said organiser Charlie Inglis, as total proceeds have already topped £100,000.

The Norfolk Churches Trust supports places of worship of all denomination in the county of Norfolk and the diocese of Norwich. In the past 36 years, the annual Bike Ride has raised a total of almost £3m to safeguard the heritage of churches and chapels.

Membership of the trust costs from £30pa or £45 for joint. Details on the website.