Norfolk’s Bike Ride has already raised £100,000 to help care for the county’s priceless heritage of churches and chapels.

It has taken just a month to beat last year’s overall total of £94,000, said organiser and trustee Charlie Inglis. “We’ve already beaten the 2019 results, which itself beat the 2018 total,” he added.

“This is great news that the total with the latest cheques and expected Gift Aid from qualifying donations has topped the £100,000 mark,” he added.

Funds raised benefit the Norfolk Churches Trust and are shared with the fund-raiser’s own church. 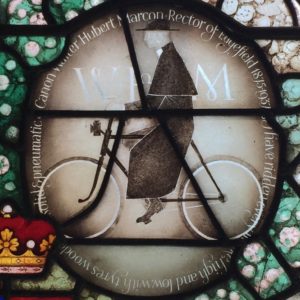 In the past 34 years, almost £3m has been raised to enable the Norfolk Churches Trust care for the heritage of churches and chapels of all denomination.

Mr Inglis, who with his son, Lorne and his three friends, cycled to a total of 23 churches on September 12, said that glorious weather had certainly helped.

He thanked hundreds of fund-raisers for making the effort to help the trust and of course, their own churches.

A number of donations had also boosted the total including one from an anonymous donor in north Norfolk, who had given the trust £25,000 to be shared with All Saints, Burnham Thorpe. This gift had been made to thank Mary Heather, who has been a long-term fund-raiser and supporter of the annual Bike Ride.

Mr Inglis said that the support of the Bishop of Norwich, who is a vice-patron of the trust, had been very welcome in encouraging so many fund-raisers to take part in last month’s event.