A £90,000 project to re-hang the bells at a north Norfolk church has been completed.

The Norfolk Churches Trust contributed £1,000 towards a new bell frame for All Saints, Upper Sheringham. 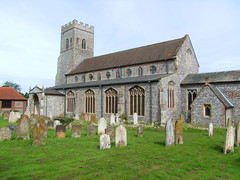 It has taken about two years from start to finish, said Sue Morton, who has led the project. The bells were returned to the tower in August and work to re-hang the peal of six was finished by the end of the month.

And, when Covid-19 restrictions are eased to allow six ringers in the tower, it will be possible for the first time since 1935 to have a complete traditional peal.

The bells were scheduled to be installed earlier this spring but Covid-19 lockdown on March 23 halted progress, she said. Nicholson Engineering, of Bridport, Dorset, were the bellhangers. A number of others were also involved including local builder Malcolm Abbs, joiner Jon Dorey, carpenter Chris Copage, fabric officer Alan Boardman and volunteers Ian Dent, Steve Upton and Guy Morton.

The six bells were cast in 1841 and it is likely that bell metal from the original three medieval bells was used.

Mrs Morton said appreciated the support of so many trusts and organisations, which helped the project. However, there still remains a shortfall of some £6,000, which needs to be raised to clear the ledger.

The final element includes adding a glass balustrade in the ringing chamber – to be dedicated to the memory of Elizabeth Martin, a former organist at the church. It will bear the inscriptions, often dubbed the bellringers’ hymn: “We call, from tower and steeple, Upon the day of days, All faithful Christian people, To Worship, prayer and praise” taken from the hymn, Unchanging God.

Meanwhile the sound of six bells can be heard again – partly because the electronic ringing mechanism is also being used alongside the three ringers.

The bells were removed from St Peter, Hedenham, in August and now the £36,000 restoration has been completed. A £15,000 grant from the Saracen Trust met almost half the total cost of refurbishing the Victorian bells.

An automatic ringing system, fitted by John Taylor & Co, of the Loughborough bell foundry, will enable the bells to sound gain.

Chris Trayke, said that a test ring took place in 1991. “They’ haven’t rung in anger since then, so it will be wonderful to hear from them.”