A Norfolk church is a finalist in a national conservation award. 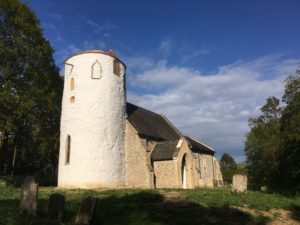 The judges of the 2019 John Betjeman Award for excellence in conservation have just visited St Nicholas, West Lexham, which completed a £250,000 restoration project in January.

The round tower church of St Nicholas was one of 23 entries for the annual award, which will be made by the Society for the Protection of Ancient Buildings.

It was selected by the judges with three other churches at Grasmere, Cumbria; Tiverton, Devon and Dodington, Somerset.

The John Betjeman Award, which is open to all places of worship and all denominations in England and Wales, seeks to recognise the highest standards of repair and conservation.

Mr Niels Olesen, treasurer of West Lexham parochial church council, was delighted that St Nicholas is a finalist in this prestigious award. “We’ve had tremendous help from so many organisations and groups. We were fortunate to obtain a maximum grant from the Heritage Lottery Fund,” he added.

The Norfolk Churches Trust awarded £7,000 in 2017 towards the project and the Round Tower Churches Society gave £1,000.

Major restoration was necessary because water damage to the chalk and flint walls threatened the church and also the tower, he explained. As part of the project, some work carried out in the early 1990s had to be replaced because in the tower, cement render was found to be causing more water damage and trapping moisture in the walls. “If it had not been removed, the tower itself may eventually have crumbled,” said Mr Olesen.

And the builders, S & L Restoration also used a traditional material, hot lime mortar, for much of the repair work.

Also the steel bands, which had been tied around the tower in the earlier restoration work, have now been removed.

Mr Olesen said that the architects, Norwich-based Nicholas Warns, helped to transform the church into a gleaming success especially since the tower has been whitewashed. Architect Dominico D’Alessandro, who took on responsibility for the project three years ago on his second day with the practice was thrilled that the project has been recognised in this national award.

The winner will be announced, and the award presented, at the SPAB members’ meeting at Boxley Abbey, Maidstone, Kent, on July 13.