***9th August.  This recital is now sold out.  Many apologies if you had hoped to book tickets.***

Lord and Lady Cholmondeley and the Norfolk Churches Trust invite you to a truly special evening piano recital by Sir Stephen Hough in the Picture Gallery at Houghton Hall. 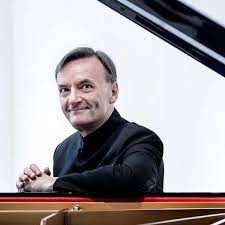 “ Few living pianists manage to combine
open-hearted virtuosity with so tangible
and unaffected a sense of an inner world
beyond the notes.”   (The Arts Desk)

Named by The Economist as one of Twenty Living Polymaths, Sir Stephen Hough
combines a distinguished career as a pianist with those of composer and writer. He was
the first classical performer to be awarded a MacArthur Fellowship, was made a
Commander of the Order of the British Empire (CBE) in 2014, and was awarded a
Knighthood for Services to Music in 2022.

Sir Stephen is a regular guest at festivals such as Salzburg, Mostly Mozart, Edinburgh,
Aldeburgh and the BBC Proms.

Tickets £45 (which include light refreshments during the interval) can be purchased by clicking on the link beneath the programme notes below.

Sir Stephen’s programme notes for the performance are as follows:

There are a couple of themes occurring throughout this programme:
firstly the world of charms and spells: Mompou’s Magic Songs, then
Scriabin’s audacious conjuring of ecstatic fire, then Debussy’s
triptych with its dreams of Asia, Spain and France. We end the concert
in hell with Liszt! But also I wanted to celebrate composer-pianists,
not so much as performers but as creators at the piano. It is
impossible to imagine the music on the first half of this programme as
having been written away from the keyboard, so direct is the
connection from hands to strings to sound. Liszt first made a whole
concert out of solo piano music, inventing the word ‘recital’ to
describe it, so pianists ever since are in debt both to his design and
to his hand which shaped the patterns on the keys which we all trace
in his shadow.

My Partita is in five movements. Its outer, more substantial bookends
have an ‘English’ flavour and suggest the world of a grand cathedral
organ. The first of these alternates between ceremonial pomp and
sentimental circumstance, whereas the final movement, taking thematic
material from the first, is a virtuosic toccata – a sortie out of the
gothic gloom into brilliant Sunday sunshine. At the centre of the work
are three shorter movements each utilising the interval of a fifth: a
restless, jagged Capriccio of constantly shifting time signatures, and
two Cançion y Danzas, inspired by the Catalan composer we heard at the
beginning: Federico Mompou.

NB There is a chance that Sir Stephen will decide to substitute
Partita with his Sonatina Nostalgica on the evening.  This is at Sir
Stephen’s discretion.